Disruption Mindset Why Some Organizations Transform While Others Fail

Disruption Mindset Why Some Organizations Transform While Others Fail

Li, Charlene
Innbundet / 2019 / Engelsk
Many companies make disruption their goal. They believe that if they develop the right innovation, they will disrupt their markets forever and drive the kind of growth worthy of a magazine cover story. But as bestselling author Charlene Li explains, that's not how disruption works. Disruption doesn't create growth; instead, growth creates disruption.Growth is always hard, and disruptive growth is exponentially harder. It requires companies to make tough decisions in the face of daunting uncertainties: Should we bet our company's future on next-generation customers or today's reliable ones? Should we abandon our current business model for an entirely new one? Making bold changes demands bold leadership and, often, massive cultural transformation.Over the years, Li has seen some organizations beat the odds and succeed at becoming disruptive: Adobe, ING Bank, Nokia, Southern New Hampshire University, and T-Mobile, among them. Their stories make it clear that organizations don't have to be tech start-ups or have the latest innovations to transform. What they need to do is develop a disruptive mindset that permeates every aspect of the organization. Li lays out how to do so by focusing on three elements: a strategy designed to meet the needs of future customers;leadership that creates a movement to drive and sustain transformation; anda culture that thrives on disruptive change. Drawing on interviews with some of the most audacious people driving disruptive transformation today, Li will inspire leaders at all levels to answer the call to lead disruptive transformation in their organizations, communities, and society.
Les mer
Strong social media presence297,505 Facebook followers237,885 LinkedIn followers109,000 Twitter followers 35,000 email list with Altimeter, 35,000 email list with ProphetNewsletter relaunching in April 2017Podcast launching in May 2017Sending out 500 books to clients, 500 books to press and influencersActive speaking business swaps speaking fees for book purchasesPress/influencer launch event in San Francisco in one of the famous "Painted Ladies"Press tour in NYC and San FranciscoDisruptive book formats to engage next generation business audienceSnapchat version of the bookVideo course on UdemyAMA sessionsKickstarter campaign with exclusive offersSkim version of the book (Intro + Outline + Chapter Summaries) Disruptor Kits: Package for Disruptors that includes 10 books (or more) for the executive team, downloadable worksheets, and exclusive access to video content.
Les mer
Charlene Li is the founder and CEO of Altimeter Group and the author of the New York Times bestseller Open Leadership: How Social Technology Can Transform How You Lead. She is also the coauthor of the critically acclaimed, bestselling Groundswell: Winning in a World Transformed by Social Technologies, which was named one of the best business books in 2008. Charlene is frequently quoted by leading media channels such as The Wall Street Journal, New York Times, USA Today, Reuters, and The Associated Press. She has appeared on 60 Minutes, The McNeil NewsHour, ABC News, CNN, and CNBC. She is a much-sought after public speaker and has keynoted top conferences such as the World Business Forum, World Economic Forum, American Society of Association Executives, SXSW, and Web 2.0. A graduate of Harvard Business School, with a magna cum laude degree from Harvard College, she currently lives in San Francisco. You can follow her blog at charleneli.com/blog and at twitter.com/charleneli.
Les mer
Nettpris:
311,-
Midlertidig tomt hos leverandør

Hidden Treasures Why Some Succeed While Others Fail
Lewis, Harry A
Innbundet / 2017 / Engelsk
396,-

Hidden Treasures Why Some Succeed While Others Fail
Lewis, Harry A
Heftet / 2017 / Engelsk
293,- 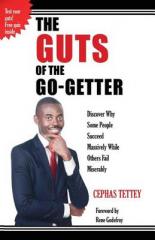 Guts of the Go-Getter Discover Why Some People Succeed Massively While Others Fail Miserably
Tettey, Cephas
Heftet / 2016 / Engelsk
265,- 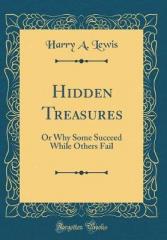