Herodotus Bowie, A. M.
Heftet / 2007 / Engelsk
The Battle of Salamis was the first great (and unexpected) victory of the Greeks over the Persian forces under Xerxes, whose defeat had important consequences for the subsequent history and self-image of Europe. This battle forms the centre-piece of book VIII of Herodotus' Histories. The book also illuminates Greek views of themselves and of peoples from the East, the problematic relationships between different Greek states in the face of the invasion, and the role of the divine in history. This introduction and commentary pays particular attention to the history and culture of Achaemenid Persia and the peoples of its empire. It offers much help with the language of the text (which has been prepared for ease of reading), and deals with major literary and historical questions. It will be of especial use to intermediate and advanced Greek students, but also provides up-to-date scholarly materials for graduate students and professional classicists.
Les mer
Book VIII of Herodotus' Histories covers the early part of the unsuccessful invasion of Greece by Xerxes, king of Persia. Its centre-piece is the unexpected but crucial Greek naval victory at Salamis. This edition provides all the help required by a reader with little experience of Greek.
Les mer
Introduction; 1. Medes and Persians; 2. Greeks and Persians; 3. Xerxes in Herodotus; 4. Achaemenid campaigns; 5. Battle of Book 8; 6. Structure and narrative modes; 7. The language of Herodotus; 8. Life of Herodotus; 9. The text; Commentary.
Les mer
'... wide-ranging lucid introduction ...' The Times Literary Supplement'We heartily recommend this volume as an introduction to Herodotos' Greek and methods of presentation.' Bryn Mawr Classical Review
Les mer
An edition for students of this important book whose centre-piece is the Battle of Salamis.
Nettpris:
348,-
Levering 3-20 dager 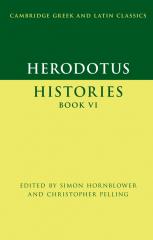 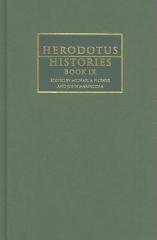 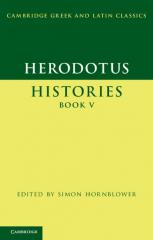