Porta, Donatella Della Vannucci, Alberto
Heftet / 2016 / Engelsk
When corruption is exposed, unknown aspects are revealed which allow us to better understand its structures and informal norms. This book investigates the hidden order of corruption, looking at the invisible codes and mechanisms that govern and stabilize the links between corrupters and corruptees. Concentrating mainly on democratic regimes, this book uses a wide range of documentation, including media and judicial sources from Italy and other countries, to locate the internal equilibria and dynamics of corruption in a broad and comparative perspective. It also analyses the Transparency International Annual Reports and the daily survey of international news to present evidence on specific cases of corruption within an institutional theory framework.
Les mer
Contents: The hidden order of corruption: an introduction; The governance structures of corrupt exchanges; Corruption as a normative system; Bureaucratic corruption; Political actors in the governance of corrupt exchanges; The entrepreneurial management of corrupt exchanges; Brokers in corruption networks: the role of middlemen; Organized crime and corruption: mafias as enforcers in the market for corrupt exchange; Snowball effects: how corruption may become endemic; Conclusion: anticorruption policy and the disarticulation of governance structures in corrupt exchanges; Bibliography; Index.
Les mer
'Corruption - often seen as opportunistic rulebreaking-has norms and codes all its own. They are among the most important, yet least understood, reasons why it is so tenacious. Della Porta and Vannucci bring out the "deep structure" of corruption, challenging the ways we look at it and many of our strategies for reform.' Michael Johnston, Colgate University, USA 'Uncertainty, mutual distrust, and fear are usually things to avoid. Yet, Della Porta and Vannucci show that they are essential for the control of corruption. Interpersonal trust and norms of reciprocity facilitate bribery. Their rich and fascinating book illustrates this argument with a wide variety of examples, ranging from Italy to Illinois to Sub-Saharan Africa.' Susan Rose-Ackerman, Yale Law School, USA '...a wonderfully researched analysis...The authors have skilfully undertaken innovative and path -breaking research and woven it into a strong analytical narrative...This well researched and thoughtful book is original in its analysis of a complex and elusive set of behaviours that invite more criminological research.' Australian and New Zealand Journal of Criminology
Les mer
Donatella della Porta is Professor of Sociology at the European University Institute. Among her recent publications are: Approaches and Methodologies in the Social Sciences (with Michael Keating), Cambridge University Press; Voices of the Valley, Voices of the Straits (with Gianni Piazza), Berghan, 2008; The Global Justice Movement, Paradigm, 2007; (with Massimiliano Andretta, Lorenzo Mosca and Herbert Reiter), Globalization from Below, The University of Minnesota Press; (with Abby Peterson and Herbert Reiter), The Policing of Transnational Protest, Ashgate 2006; (with Manuela Caiani), Quale Europa? Europeizzazione, identitA e conflitti (Il Mulino, 2006); (with Mario Diani), Social Movements: an introduction, 2nd edition, Blackwell, 2006; (with Sidney Tarrow), Transnational Protest and Global Activism, Rowman and Littlefield, 2005. Alberto Vannucci is Professor of Political Science at the University of Pisa. Among his publication on corruption Corrupt Exchange (New York, 1999, with D. della Porta), Unclean Hands (Rome 2007, with D. della Porta). Other publications: The spectre of competitiveness: the Institutional Roots of the Italian Decline (Rubbettino 2006 with R. Cubeddu); The Governance of Uncertainty: Public Choice and Institutional Change (Soveria Mannelli 2004). He has collaborated with the Italian Parliamentary Committee for the Prevention of Corruption.
Les mer
Nettpris:
585,-
Levering 3-20 dager 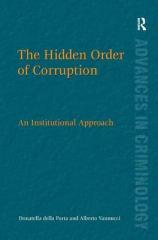 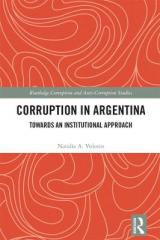 Corruption in Argentina Towards an Institutional Approach
Volosin, Natalia A.
Innbundet / 2019 / Engelsk
1.452,- 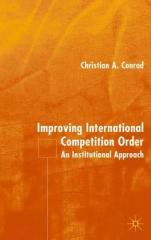