Bremmer, Jan N.
Heftet / 2015 / Engelsk
Interpretations of Greek Mythology, first published in1987, builds on the innovative work of Walter Burkert and the 'Paris school' of Jean-Pierre Vernant, and represents a renewal of interpretation of Greek mythology. The contributors to this volume present a variety of approaches to the Greek myths, all of which eschew a monolithic or exclusively structuralist hermeneutic method. Specifically, the notion that mythology can simply be read as a primitive mode of narrative history is rejected, with emphasis instead being placed on the relationships between mythology and history, ritual and political genealogy. The essays concentrate on some of the best known characters and themes - Oedipus, Orpheus, Narcissus - reflecting the complexity and fascination of the Greek imagination. The volume will long remain an indispensable tool for the study of Greek mythology, and it is of great interest to anyone interested in the development of Greek culture and civilisation and the nature of myth.
Les mer
List of Figures and Table; Abbreviations; Preface 1. What is a Greek Myth? Jan Bremmer 2. Oriental and Greek Mythology: The Meeting of Parallels Walter Burkert 3. Oedipus and the Greek Oedipus Complex Jan Bremmer 4. Wolves and Werewolves in Greek Thought Richard Buxton 5. Orpheus: A Poet Among Men Fritz Graf 6. Reflections, Echoes and Amorous Reciprocity: On Reading the Narcissus Story Ezio Pellizer 7. Greek Myth and Ritual: The Case of Kronos H.S. Versnel 8. Spartan Genealogies: The Mythological Representation of a Spatial Organisation Claude Calame 9. Myths of Early Athens Robert Parker 10. Myth as History: The Previous Owners of the Delphic Oracles Christine Sourvinou-Inwood 11. Three Approaches to Greek Mythology Albert Henrichs 12. Greek Mythology: A Select Bibliography (1965-1989) Jan Bremmer; Index
Les mer
Nettpris:
596,-
Levering 3-20 dager 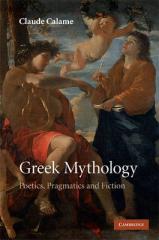