Cox, Michael M. O'Donnell, Michael
Lisensnøkkel fysisk / 2015 / Engelsk
This is the access card only, does not include textbook. LaunchPad is an interactive online resource that helps students achieve better results. LaunchPad combines an interactive e-book with high-quality multimedia content and ready-made assessment options, including LearningCurve, our adaptive quizzing resource, to engage your students and develop their understanding. Unique LaunchPad features included in Molecular Biology: * Pre-built Units for each chapter, curated by experienced educators, with media for that chapter organized and ready to assign or customize to suit your course.* Intuitive and useful analytics, with a Gradebook that lets you see how your class is doing individually and as a whole.* A streamlined and intuitive interface that lets you build an entire course in minutes.LearningCurve in Launchpad In a game-like format, LearningCurve adaptive and formative quizzing provides an effective way to get students involved in the coursework. It offers:* A unique learning path for each student, with quizzes shaped by each individual's correct and incorrect answers.* A Personalised Study Plan, to guide students' preparation for class and for exams.* Feedback for each question with live links to relevant e-book pages, guiding students to the reading they need to do to improve their areas of weakness.
Les mer
Michael M. Cox is Assistant Chair, Department of Biochemistry at the University of Wisconsin-Madison. He received his B.A. in Biology from the University of Delaware and his Ph.D. in Biochemistry from Brandeis University. Cox's current research activity involves studies of the mechanism of action of proteins involved in genetic recombination. This work is focused on the bacterial RecA protein, the bacterial RecF, RecO, RecR, RecG, RuvA, and RuvB proteins, the yeast Rad 51 protein, and more broadly on the mechanism of the recombinational DNA repair of stalled replication forks. Jennifer A. Doudna grew up on the Big Island of Hawaii, where she became interested in chemistry and biochemistry during her high school years. She is currently Professor of Molecular and Cell Biology and Professor of Chemistry at the University of California, Berkeley and an Investigator of the Howard Hughes Medical Institute. She received her B.A. in biochemistry from Pomona College and her Ph.D. from Harvard University, working in the laboratory of Jack Szostak, with whom she also did postdoctoral research. Michael O'Donnell received his Ph.D. at the University of Michigan, where he worked under Charles Williams Jr. on electron transfer in the flavoprotein thioredoxin reductase. He performed postdoctoral work on E. coli replication with Arthur Kornberg and then on herpes simplex virus replication with I. Robert Lehman, both in the biochemistry department at Stanford University. O'Donnell then became a member of the faculty of Weill Cornell Medical College in 1986 and an investigator at the Howard Hughes Medical Institute in 1992 before moving to The Rockefeller University in 1996. O'Donnell is a member of the National Academy of Sciences."
Les mer
Nettpris:
1.041,-
Levering 3-20 dager 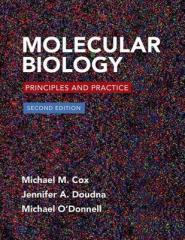