Euripides Morwood, James
Innbundet / 1997 / Engelsk
In this new translation of the most profound tragedies of Euripides, one of the trio of the supreme Greek tragedians of the fifth century BC, James Morwood brings harshly to life the pressure of the intolerable circumstances under which Euripides places his characters. His dark and cheerless world, one where the gods prove malevolent, importent, or simply absent, reveals men, to use his own words, `as they are'. His clear-eyed yet sympathetic analysis of characters such as Medea, Hippolytus and Phaedra, and Electra and Clytemnestra - and the supremacy of women is not accidental - is conducted with extraordinary psychological insight through the fearful symmetry of his plot construction. Medea, Hippolytus, and Electra give dramatic articulacy to their creator's howl of protest against the world in which we still live today. His Helen shows him working in a different vein. The themes remain deeply serious; the analysis is still proving and acute. Yet the happy ending, however equivocal, typifies a humour and warmth of spirit that offer, like Shakespeare's last plays, a fragile but genuine hope of redemption. There is a substantial general introduction and select bibliography by Edith Hall, and full explanatory notes accompany the translation.
Les mer
This new translation brings to life the tragedian described by Aristotle as `the most tragic of the poets'. In his tragedies Euripides places his characters under the pressure of intolerable circumstances, revealing them, to use his own words, `as they are'. Supremely responsive to the lot of women, these plays give voice to a howl of protest against the world in which we live.
Les mer
Hellenists and generalists alike have reason to rejoice ... adds to our understanding and appreciation of a poet-playwright who has never ceased to controversial ... comprises four major plays that are wonderful to have together. Edith Hall's introductory essays ... are eloquent and informative, deftly highlighting each play's chief issues ... several new insights into the texts, and sound explanations of the mythical background and ongoing action ... James Morwood's translations ... are extraordinary. In crisp prose ... these may be the easiest-to-read accurate versions that we are likely to see and, in the inexpensive World Classics edition are quite a bargain. No others ... lend themselves to such a ready reading ... The sheer clarity of the English is a considerable achievement. * Victor Castellani, The Classical Outlook/ Fall 1999, Vol 77 no 1 *Morwood's prose translations read smoothly and reflect current, idiomatic English speech ... the impressively ample and up-to-date select bibliography, genuinely helpful explanatory notes for each play, useful discussion of Euripides' thought and style, and the concise, informative background information about the world in which Euripides lived all contribute to the value of this book. * L. Golden, CHOICE *
Les mer
Nettpris:
1.198,-
Levering 3-20 dager 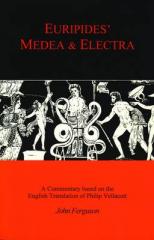 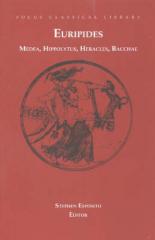