Cannon, Jon Williamson, Beth
Innbundet / 2011 / Engelsk
Bristol cathedral, formerly the abbey of St Augustine, is a remarkable building. To medievalists it is an enigmatic and compelling place, filled with important work of various periods, work that raises a range of important questions about style, patronage and the intentions behind medieval architecture. Conversely, to the wider public, the cathedral is not well-known compared to others; this spectacular building tends to hide its light under a bushel. Yet its remarkable, and controversial, east end alone is one of the most significant structures of its period in Europe. This volume aims to remedy the neglect by offering a history of St Augustine's. Highlights include the most detailed discussions to date of the later medieval history and architecture of the church and its community, and detailed papers on the dating, attribution, patronage and historiography of the east end. In their introduction and postscript the editors draw on the material presented in the collection to draw out the wider themes and lessons suggested by the building, themes that will be of interest to all with a serious interest in the study of medieval art. Dr Jon Cannon teaches medieval architectural history at the University of Bristol and elsewhere; Dr Beth Williamson is Senior Lecturer in the Department of Historical Studies at the University of Bristol. Contributors: Roger Leech, John McNeil, Sarah Boss, Christopher Wilson, Jon Cannon, Paul Crossley, Julian M. Luxford, James G. Clark, Joseph Bettey, Cathy Oakes, Beth Williamson
Les mer
Comprehensive and lavishly illustrated survey, by major scholars, of the unjustly neglected medieval art and architecture of Bristol cathedral.
Introduction - Jon Cannon and Beth WilliamsonOn the Waterfront - The Early Medieval Landscape Setting of St Augustine's, Bristol - Roger H. LeechThe Romanesque Fabric - John McNeillWisdom's House: Abbott David's commissioning of the Elder Lady Chapel - Sarah Jane BossGothic Metamorphosed: The Choir of St Augustine's Abbey in Bristol and the Renewal of European Architecture around 1300 - Christopher WilsonBerkeley patronage and the fourteenth-century choir - Jon CannonBristol Cathedral and Nikolaus Pevsner, Sondergotik in The West Country - Paul CrossleyThe late medieval abbey: patronage, buildings and images - Julian LuxfordThe Monastic Community of St Augustine's in the Later Middle Ages - James G. ClarkThe Conversion of St Augustine's, Bristol, to a Cathedral - Joseph BetteySECRETA MEA MIHI: the wall-paintings from the Old Deanery of Bristol Cathedral - Cathy OakesEpilogue - Beth WilliamsonGlossaryBibliography
Les mer
Illuminate our understanding of the cathedral's fabric and patronage history and, by extension therefore, the context of the production and commissioning of monuments. ... A useful addition to the collections of those interested in the histories of Gothic architecture, monastic patronage, and of Bristol itself. CHURCH MONUMENTS Its main strength is to be found in the close attention it pays to the twin issues of the rich architectural creativity at Bristol in the early fourteenth century and the role of secular patronage in such creativity. ANNUAL BULLETIN OF HISTORICAL LITERATURE A major contribution to knowledge, beautifully produced. TRANSACTIONS OF THE BRISTOL & GLOUCESTERSHIRE ARCHAEOLOGICAL SOCIETY All with interest in the middle ages could enjoy these ten well-illustrated architectural detective stories. BRITISH ARCHAEOLOGY A valuable work in well-researched detail that greatly advances our knowledge. CHURCH TIMES
Les mer
Nettpris:
1.052,-
Levering 3-20 dager 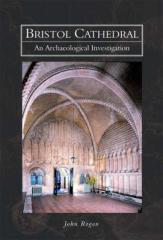