No Fist Is Big Enough to Hide the Sky The Liberation of Guinea-Bissau and Cape Verde, 1963-74

No Fist Is Big Enough to Hide the Sky The Liberation of Guinea-Bissau and Cape Verde, 1963-74

Davidson, Basil
Heftet / 2017 / Engelsk
No Fist Is Big Enough to Hide the Sky stands as a key text in the history of the eleven-year struggle against Portuguese rule in Guinea-Bissau and Cape Verde. Though perhaps less well known than the struggles in Angola and Mozambique, the liberation war waged by the African Party for the Independence of Guinea and Cape Verde (PAIGC) easily ranks alongside those conflicts as an example of an African independence movement triumphing against overwhelming odds. Basil Davidson, a leading authority on Portuguese Africa who witnessed many of these events first hand, draws on his own extensive experience in the country as well as the PAIGC archives to provide a detailed and rigorous analysis of the conflict. The book also provides one of the earliest accounts of the assassination of the PAIGC's founder, Amilcar Cabral, and documents the movement's remarkable success in recovering from the death of its leader and in eventually attaining independence. Featuring a preface by Cape Verde's first president, Aristides Pereira, and a foreword by Cabral himself, No Fist is Big Enough to Hide the Sky remains an invaluable resource for the study both of the region and of African liberation struggles as a whole.
Les mer
Basil Davidson's unsurpassed study of the struggle against colonial rule in Gunea-Bissau and Cape Verde
Foreword by Zachariah MampillyAuthor's Note to the 1981 EditionPreface by Aristides PereiraForeword by Amilcar Cabral1. Why?2. How? With Whom?3. Under What Precise Conditions?4. By What Political Principles and Organization?5. By What Military Methods?6. Involving What Obligations?7. Towards What Future?8. With What Wider Meaning?9. Carrying Through: 1968-7210. Meeting the Bitterest Loss: 197311. The End of Colonial Rule12. Building and RebuildingNote on Further Reading in English
Les mer
'Possesses many of the strengths of Davidson's best work ... a fascinating trove for scholars interested in the internal structure and behaviour of one of the most novel and inclusive armed groups of all time.'Zachariah Mampilly, from the Foreword'The author has sought to interpret the realities of our life and struggle in the light of what he saw and lived through with us, as well as of a deep knowledge of African history and an awareness of what is essential in the history of today ... we are grateful to him.'Amilcar Cabral, from the Preface
Les mer
Basil Davidson ranks as one of the most remarkable Africanist historians of his generation. Born in Bristol in 1914, he worked as a journalist for the Times, the New Statesman and other publications, as well as serving in the Second World War as an intelligence officer in Nazi-occupied Europe. After the war, he went on to become a leading authority on Portuguese Africa, and was one of the first scholars to emphasize the pre-colonial achievements of African civilizations, as well the damaging effects wreaked on the continent by colonialism. He was also a passionate advocate for contemporary anti-colonial struggles, and witnessed many of these struggles first hand. Among his many notable books are The African Genius (1969) and The Black Man's Burden: Africa and the Curse of the Nation-State (1992). He died in 2010.Zachariah Mampilly is the director of Africana Studies and an associate professor of political science and international studies at Vassar College. He is the author of Rebel Rulers: Insurgent Governance and Civilian Life during War (2011) and (with Adam Branch) Africa Uprising: Popular Protest and Political Change (Zed 2015).
Les mer
Nettpris:
322,-
Levering 3-20 dager 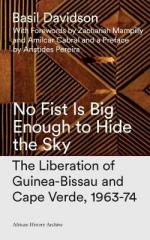 No Fist Is Big Enough to Hide the Sky The Liberation of Guinea-Bissau and Cape Verde
Davidson, Basil
Heftet / 1984 / Engelsk
145,- 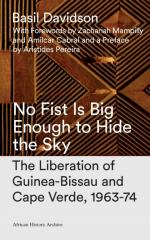 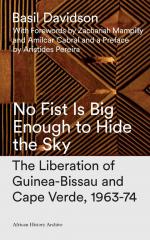