Freire, Paulo
Innbundet / 1998 / Engelsk
In Pedagogy of Freedom Paulo Freire travels ever more deeply into the territory where learning and activism are the essence of human life. This profound new book shows why an engaged way of learning and teaching is central to the creation of the individual, culture, and history. Freire finds in today's emerging global society a new context in which education cannot be indifferent to the reproduction of dominant ideologies and the interrogation of them. He argues against "progressive" liberalism and its passive acceptance of a world where unemployment and hunger must inevitably co-exist with opulence. In so doing, he shows why an acceptance of fatalism leads to loss of personal and societal freedom-and how those individuals who think without optimism have lost their place in history. This book displays the striking creativity and profound insight that characterized Freire's work to the very end of his life-an uplifting and provocative exploration not only for educators, but for all who learn and live.
Les mer
In this text, the author, Paulo Freire, argues against progressive liberalism and its passive acceptance of a world where unemployment and hunger exist side by side with opulence. He shows why an acceptance of fatalism leads to the loss of personal and societal freedom.
Les mer
Chapter 1 Foreword Chapter 2 Introduction Chapter 3 Introductory Reflections Part 4 Part I. There is No Teaching Without Learning Chapter 5 Methodological Rigor Chapter 6 Research Chapter 7 Respect for What Students Know Chapter 8 A Capacity to be Critical Chapter 9 Ethics and Aesthetics Chapter 10 Words Incarnated in Example Chapter 11 Risk, Acceptance of What is New, and Rejection of Discrimination Chapter 12 Critical Reflection on Practice Chapter 13 Cultural Identity Part 14 Part II. Teaching is Not Transferring Knowledge Chapter 15 Awareness of Our Unfinishedness Chapter 16 Recognition of One's Conditioning Chapter 17 Respect for the Autonomy of the Student Chapter 18 Common Sense Chapter 19 Humility, Tolerance, and Struggle for the Rights of Educators Chapter 20 Capacity to Apprehend Reality Chapter 21 Joy and Hope Chapter 22 Conviction that Change is Possible Chapter 23 Teaching Requires Curiosity Part 24 Part III. Teaching is a Human Act Chapter 25 Self-Confidence, Professional Competence and Generosity Chapter 26 Commitment Chapter 27 Education as a Form of Intervention in the World Chapter 28 Freedom and Authority Chapter 29 Decision- Making that is Aware and Conscious Chapter 30 Knowing How to Listen Chapter 31 Recognition that Education is Ideological Chapter 32 Openness to Dialogue Chapter 33 Caring for Students
Les mer
Pedagogy of Freedom, Paulo Freire's last will and testament, is his best book since Pedagogy of the Oppressed. -- Stanley Aronowitz, CUNY Graduate Center, author of From the Ashes of the Old: American Labor and America's FuturePedagogy of Freedom is a stirring culmination of Paulo Freire's life work. It is in no way a conclusion or a summation: it is a text that urges its readers to become, to reach towards still untapped possibility. The themes of Freire's earlier writing are extended here into thoughtful explorations of ethics and democracy and the ways in which they may release a sense of agency in the long exploited and cruelly silenced. Moreover, he has new things to say about ideology and freedom in a world marked by a threatening 'globalization' and an unprecedented manipulation by media. As before, he speaks of 'passion,' 'love,' and 'caring;' and, each time he does so, it is as if his hand grasps each one of our shoulders, urging us on and on. -- Maxine Greene, Columbia UniversityBraiding bold vision with precision, Freire, in his brilliance, allows us to imagine a tomorrow of democracy and freedom. Insisting on the 'incompleteness' of us all and on a 'dreamer's right to dream,' Pedagogy of Freedom reminds us that our work is never done; that change is always possible, always essential, always unfinished. -- Michelle Fine, The Graduate School and University Center, City University of New YorkWith Pedagogy of Freedom, Paulo Freire enriches the dialogical perspectives with a call for universal ethics that establishes a better foundation for education in the next century. -- Ramon Flecha, University of Barcelona, SpainAt the threshold of the twenty-first century, we face the need to learn a new and more communicative way of constructing educational theory. With Pedagogy of Freedom, Freire contributes a unique guide to such a mission. . . . While social sciences are witnessing the revival of the idea of deliberative democracy (Elster, 1988), as well as the possibility of transforming social positions through dialogue (Giddens, 1994), we now have a book that discusses how to develop such dialogic democracy in education. In Pedagogy of Freedom, Freire defends a universal human ethic that extends not only to schools but also to teachers' training. * Harvard Educational Review *This book is a repository of Freire's wisdom, the wisdom that informs his philosophy of education and his educational approach. . . . I would recommend this one as very important. * Studies In The Education Of Adults *Pedagogy of Freedom is almost an elegy. In looping around themes that have run through his work, Freire's book is a reminder of his fundamentally optimistic vision of the radical possibilities for education. * College English *Paulo Freire is one of the ideological giants. . . . In this book, Freire remains passionately idealistic and inspirational, without denying the complexity of the work or the difficulty of creating real change. It is one of the rare tomes to which one can return again and again... * What On Earth *
Les mer
The late Paulo Freire of Brazil-teacher, philosopher, and activist-is widely regarded in the U.S. and elsewhere as one of the most influential educators of the 20th century. He is the author of more than 20 books, which have been translated and sold widely throughout the world. Among his many books are the classic Pedagogy of the Oppressed (ISBN 0-8264-0611-4) and Letters to Christina (ISBN 0-4159-1097-8).
Les mer
Nettpris:
276,-
Levering 3-20 dager 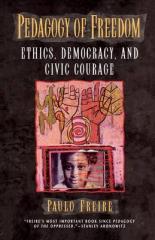 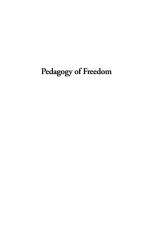 Pedagogy, Religion, and Practice Reflections on Ethics and Teaching
Block, A.
Heftet / 2007 / Engelsk
865,- 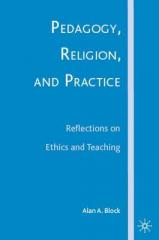