Ross, Stephen A. Westerfield, Randolph W. Jordan, Bradford D.
Spiral / 2003 / Engelsk
Provides students with an inexpensive note-taking system that contains a reduced copy of every slide in the PowerPoint presentation.
Provides students with a system that contains a reduced copy of various slides in the PowerPoint presentation.
STEPHEN A. ROSS Sloan School of Management, Massachusetts Institute of Technology Stephen A. Ross was the Franco Modigliani Professor of Finance and Economics at the Sloan School of Management, Massachusetts Institute of Technology. One of the most widely published authors in finance and economics, Professor Ross was widely recognized for his work in developing the Arbitrage Pricing Theory and his substantial contributions to the discipline through his research in signaling, agency theory, option pricing, and the theory of the term structure of interest rates, among other topics. A past president of the American Finance Association, he also served as an associate editor of several academic and practitioner journals. He was a trustee of CalTech. He died suddenly in March of 2017. Randolph W.Westerfield is Dean Emeritus of the University of Southern California's Marshall School of Business and is the Charles B. Thornton Professor of Finance. He came to USC from the Wharton School, University of Pennsylvania, where he was the chairman of the finance department and a member of the finance faculty for 20 years. Bradford D. Jordan is Professor of Finance and holder of the Richard W. and Janis H. Furst Endowed Chair in Finance at the University of Kentucky. He has a longstanding interest in both applied and theoretical issues in corporate finance and has extensive experience teaching all levels of corporate finance and financial management policy.
Les mer
Nettpris:
125,-
Levering 3-20 dager 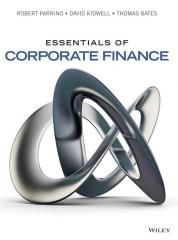