Ghosh, Amitav
LydCD / 2009 / Engelsk
On an old slaving ship named the Ibis, fate has thrown together a truly diverse cast of Indians and Westerners. The motley crew of sailors, coolies, and convicts includes a bankrupt Raja, a Chinese Opium addict, a lissom French runaway and a mulatto freedman from Baltimore. As their old family ties are washed away, they, like their historical counterparts, come to view themselves as jahaj-bhais, or ship-brothers. Against the backdrop of the Opium Wars, an unlikely dynasty is born, which will span continents, races, and generations.
Les mer
Shortlisted for the Man Booker Prize 2008
Shortlisted for the Man Booker Prize 2008
Amitav Ghosh was born in Calcutta in 1956. He studied at the universities of Delhi and Oxford and has written six novels. He currently divides his time between Calcutta, Goa and Brooklyn, and is writing the next volume of what will become the Ibis Trilogy.
Les mer
Nettpris:
281,-
Levering 3-20 dager 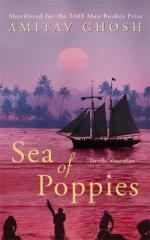