More, Thomas
Heftet / 2012 / Engelsk
'It remains astonishingly radical ... one of Utopia's most striking aspects is its contemporaniety' Terry EagletonIn Utopia, Thomas More gives us a traveller's account of a newly-discovered island where the inhabitants enjoy a social order based on natural reason and justice, and human fulfilment is open to all. As the traveller describes the island, a bitter contrast is drawn between this rational society and the practices of Europe. How can the philosopher reform his society? In his discussion, More takes up a question first raised by Plato and which is still a challenge in the contemporary world. In the history of political thought few works have been more influential than Utopia, and few more misunderstood.Translated and introduced by Dominic Baker-Smith
Les mer
Offers a traveller's account of a newly-discovered island (Utopia) where the inhabitants enjoy a social order based on natural reason and justice, and human fulfillment is open to all.
Thomas More (Author) Thomas More was born a Londoner in 1477 or 1478. He served as a page, then studied at Oxford, was called to the bar and subsequently had a highly successful career in the City. Sent on an embassy to Flanders in 1515, he began Utopia there and completed it back in London. From 1528 he actively resisted innovation in religious matters and clashed with Henry VIII over his break with the Church. In July 1535, after he refused to accept royal supremacy over the church, he was tried as a traitor at Westminster Hall and beheaded on Tower Hill. He was canonized by Pope Pius XI in 1935.Dominic Baker-Smith (Translator) Dominic Baker-Smith OBE was a Fellow of Fitzwilliam College, Cambridge, Professor of English at University College, Cardiff, and Emeritus Professor at the University of Amsterdam. His books included More's 'Utopia' (2000) and he edited three volumes in the University of Toronto Press' Collected Works of Erasmus.
Les mer
Nettpris:
128,-
Levering 3-20 dager 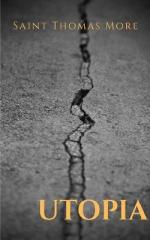 Utopia Or the Happy Republic, a Philosophical Romance. to Which Is Added, the New Atlantis, by Lord
More, Sir Thomas, Saint
Heftet / 2009 / Engelsk
314,-