What's Happened To The University? A sociological exploration of its infantilisation

What's Happened To The University? A sociological exploration of its infantilisation

Furedi, Frank
Heftet / 2016 / Engelsk
The radical transformation that universities are undergoing today is no less far-reaching than the upheavals that it experienced in the 1960s. However today, when almost 50 per cent of young people participate in higher education, what occurs in universities matters directly to the whole of society. On both sides of the Atlantic curious and disturbing events on campuses has become a matter of concern not just for academics but also for the general public. What is one to make of the growing trend of banning speakers? What's the meaning of trigger warnings, cultural appropriation, micro-aggression or safe spaces? And why are some students going around arguing that academic freedom is no big deal? What's Happened To The University? offers an answer to the questions of why campus culture is undergoing such a dramatic transformation and why the term moral quarantine refers to the infantilising project of insulating students from offence and a variety of moral harms.
Les mer
Introduction 1. The Weaponisation of Emotions 2. The Harms of the Academy 3. Culture War 4. Safe Space - Quarantine Against Judgment 5. Verbal Purification- The Diseasing of Free Speech 6. Micro-aggression: The Disciplining of Manners and Thought 7. The Quest for A New Etiquette 8. Trigger Warnings: The Performance of Awareness 9. Why Academic Freedom Must Not Be Rationed - An argument against the Freedom-Security Trade Off
Les mer
"Universities used to promote social and personal transformation. They now confirm a socio-political demand for conformity: they will provide a safe space in which you can endorse and celebrate your already established boiler-plate identity, as victim of historical injustice. On top of this, universities have now reneged on any responsibility for changing the conditions which in turn has caused social injustice. Furedi gives a brilliant analysis of how, sociologically, we have permitted this to happen. It should be compulsory reading for anyone interested in what has happened to the university." - Thomas Docherty, Professor of English and of Comparative Literature, University of Warwick "Frank Furedi offers a lucid challenge to what he sees as limitations to free speech in the academy. Passionate and richly illustrated it provides an important starting point for debate." - Mary Evans, LSE Centennial Professor, London School of Economics "This is a remarkably brave, much needed, timely, and challenging analysis of the current state of higher education. Furedi reflects upon the infantilisation of the university from the growth of paternalism towards students, the increasing presence of intolerance, the curtailing of academic freedom to the less obvious demands for 'learning outcomes'. Those with an invested interest in these processes will not like this book: all the better! It demands to be widely read." - Sandra Walklate, Eleanor Rathbone Chair of Sociology, University of Liverpool "Mr. Furedi, an emeritus professor at England's University of Kent, argues that the ethos prevailing at many universities on both sides of the Atlantic is the culmination of an infantilizing paternalism that has defined education and child-rearing in recent decades. It is a pedagogy that from the earliest ages values, above all else, self-esteem, maximum risk avoidance and continuous emotional validation and affirmation. (Check your child's trophy case.) Helicopter parents and teachers act as though "fragility and vulnerability are the defining characteristics of personhood."" - Excerpt from the article 'Free Thought Under Siege', by Daniel Shuchman, appearing in the Wall Street Journal, Nov. 2016. "What's Happened to the University is a tour de force, offering the most insightful explanation I have seen of higher education's abandonment of its fiduciary duty to foster intellectual freedom and the pursuit of truth. Furedi's focus on the cultural, political, and psychological forces leading to "infantilization" captures the heart of the matter." - Donald A. Downs, University of Wisconsin-Madison
Les mer
Frank Furedi is Emeritus Professor of Sociology, University of Kent, UK
Nettpris:
290,-
Levering 3-20 dager 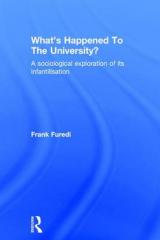 What's Happened To The University? A sociological exploration of its infantilisation
Furedi, Frank
Innbundet / 2016 / Engelsk
1.416,- 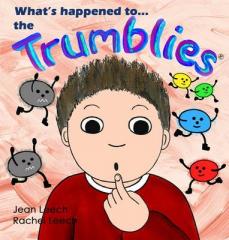 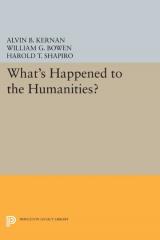