Wrong-Doing, Truth-Telling The Function of Avowal in Justice

Wrong-Doing, Truth-Telling The Function of Avowal in Justice

Foucault, Michel Brion, Fabienne Harcourt, Bernard E
Heftet / 2020 / Engelsk
Three years before his death, Michel Foucault delivered a series of lectures at the Catholic University of Louvain that until recently remained almost unknown. These lectures--which focus on the role of avowal, or confession, in the determination of truth and justice--provide the missing link between Foucault's early work on madness, delinquency, and sexuality and his later explorations of subjectivity in Greek and Roman antiquity. Ranging broadly from Homer to the twentieth century, Foucault traces the early use of truth-telling in ancient Greece and follows it through to practices of self-examination in monastic times. By the nineteenth century, the avowal of wrongdoing was no longer sufficient to satisfy the call for justice; there remained the question of who the "criminal" was and what formative factors contributed to his wrong-doing. The call for psychiatric expertise marked the birth of the discipline of psychiatry in the nineteenth and twentieth centuries as well as its widespread recognition as the foundation of criminology and modern criminal justice. Published here for the first time, the 1981 lectures have been superbly translated by Stephen W. Sawyer and expertly edited and extensively annotated by Fabienne Brion and Bernard E. Harcourt. They are accompanied by two contemporaneous interviews with Foucault in which he elaborates on a number of the key themes. An essential companion to Discipline and Punish, Wrong-Doing, Truth-Telling will take its place as one of the most significant works of Foucault to appear in decades, and will be necessary reading for all those interested in his thought.
Les mer
"A stunning set of lectures given by Foucault that focus on the history of 'avowing' one's acts and the truth of who one is. Foucault seeks to understand at what point it became important not only to confess to a crime, but to avow one's act in public. For Foucault, avowal of one's criminality before an established authority becomes a way of reestablishing that authority, and resisting avowal becomes tantamount to civil disobedience. The political implications of his analysis become especially clear in the interviews included here. This is wonderful and arresting read."--Judith Butler, University of California, Berkeley "Reconstructed through the patient labours of Fabienne Brion and Bernard Harcourt, . . . [the lectures] are now available in a scrupulous English translation."--Times Literary Supplement "Fabienne Brion and Bernard Harcourt are to be congratulated for their invaluable work."--Berfrois "The Louvain lectures show us an aspect of Foucault's work that is often neglected in an attempt to focus on his commitment to historicizing: that for histories, even genealogical histories, to be constructed, one must not only trace the changes themselves but also that which is changed and therefore remains, in its changes, continuous."--Notre Dame Philosophical Reviews "These lectures are unique and valuable in that, consistent with the direction of Foucault's work at the time, they expand his explorations of the various modalities of truth and subjectivity into the criminal justice context. Additionally, Foucault's genealogical work in these lectures situates these specific criminal justice practices within a more far-reaching history than that with which we are familiar. . . . A valuable contribution to both Foucaultian and criminological scholarship."-- (05/22/2015) "Wrong-Doing, Truth-Telling is one of Foucault's most stirring inquiries into what he has named 'the hermeneutics of oneself.' These lectures stage the concept of avowal in performances as varied as Greek tragedy, criminal justice, and confessional practices; and they provide us with some of Foucault's most illuminating observations on the intimate and agonistic relations between sites of enunciation, orders of truth, and investments of power. The subject of avowal is never free of the ethical exigency and the discursive contingency of 'chang[ing] itself, transform[ing] itself, displac[ing] itself, and becom[ing] to some extent other than itself, ' and Foucault's genius lies in providing us with critical and genealogical reflections on the worldly practices of avowal. Bernard Harcourt and Fabienne Brion's essential afterword provides both a frame and a ballast to the book. This is a considerable addition to the English archive of the work of Michel Foucault."--Homi K. Bhabha, Harvard University "The publication of Foucault's Louvain lectures, Wrong-Doing, Truth-Telling, beautifully and rigorously established and commented upon by Fabienne Brion and Bernard Harcourt, is an important event in the contemporary blossoming of Foucault studies. In no way is it redundant with the lectures at the College de France, whose series is now practically complete. With this amazingly rich inquiry, focusing on the mythical, religious, and judiciary dimensions of 'avowal, ' we are offered a unique possibility to understand how Foucault's genealogy articulated the order of discourse and the power of institutions."--Etienne Balibar, Universite Paris Ouest Nanterre La Defense, author of Politics and the Other Scene
Les mer
Michel Foucault (1926-84) was one of the most significant social theorists of the twentieth century, his influence extending across many areas of the humanities and social sciences. Fabienne Brion is professor in the School of Law and Criminology at the Catholic University of Louvain. Bernard E. Harcourt is Isidor and Seville Sulzbacher Professor of Law at Columbia Law School and the director of the Columbia Center for Contemporary Critical Thought. Stephen W. Sawyer is professor and chair of history, cofounder of the History, Law, and Society Program, and director of the Center for Critical Democracy Studies at the American University of Paris. He is editor of the Tocqueville Review and associate editor of the Annales. History and Social Sciences.
Les mer
Nettpris:
344,-
Levering 3-20 dager 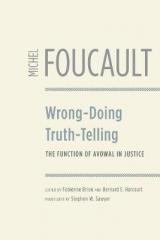 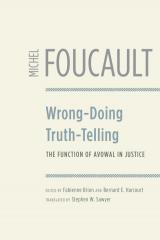 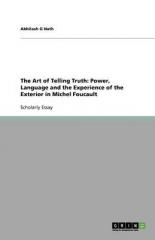 Art of Telling Truth Power, Language and the Experience of the Exterior in Michel Foucault
G Nath, Abhilash
Heftet / 2011 / Engelsk
256,- 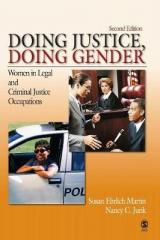