Linguistics in the Netherlands 1998

Linguistics in the Netherlands 1998

Bezooijen, Renee Van Kager, Rene
Heftet / 1998 / Engelsk
This volume contains a selection of papers presented at the twenty-ninth annual meeting of the Linguistic Society of the Netherlands, held in Utrecht on January, 17, 1998. The aim of the annual meeting is to provide members of the society with an opportunity to report on their work in progress. At this year's meeting 70 papers were presented. The 16 papers in this volume present an overview of research in different fields of linguistics in the Netherlands. It contains articles on phonetics, phonology, morphology, syntax, semantics and pragmatics.
Les mer
1. Preface (by Bezooijen, Renee van); 2. List of Contributors; 3. Subject-Verb Inversion in Spanish Wh-Questions: Movement as Symmetry Breaker (by Baauw, Sergio); 4. English and Dutch as SOV-Languages and the Distribution of CP-Complements (by Barbiers, Sjef); 5. Exclamatives! (by Bennis, Hans); 6. The Effect of Biological Gender (Sex) and Social Gender (Gender Identity) on Three Pitch Measures (by Biemans, Monique); 7. Against Feature Strength (by Broekhuis, Hans); 8. Experiments on the Semantic Contrast between the 'Pointed Hat' Contour and the Accent-Lending Fall in Dutch (by Caspers, Johanneke); 9. On Dummy Objects and the Transitivity of Run (by Cheng, Lisa L.S.); 10. (Anti-)Agreement in DP (by Dikken, Marcel den); 11. Foot Structure and Word Stress in Middle Dutch: Evidence from 'Lutgart' (by Fikkert, Paula); 12. Organizing Discourse: Direct and Indirect Speech in Mexican Spanish (by Houwen, Fleur van der); 13. From Request to Command: An Exploratory Experimental Study of Grammatical Form, Intonation, and Pragmatic Particle in Dutch Imperatives (by Kirsner, Robert S.); 14. The Position of Unselected Fingers (by Kooij, Els van der); 15. Children's Interpretations of Indefinite Object Noun Phrases: Evidence from the Scope of Negation (by Kramer, Irene); 16. Economy of Representation in the Esperanto Word (by Oostendorp, Marc van); 17. How Reduced are Reduced Relatives? (by Sleeman, Petra); 18. Va- and Van-Participles in Hungarian (by Toth, Ildiko)
Les mer
Nettpris:
899,-
Levering 3-20 dager 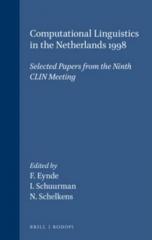 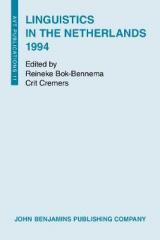 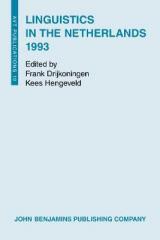